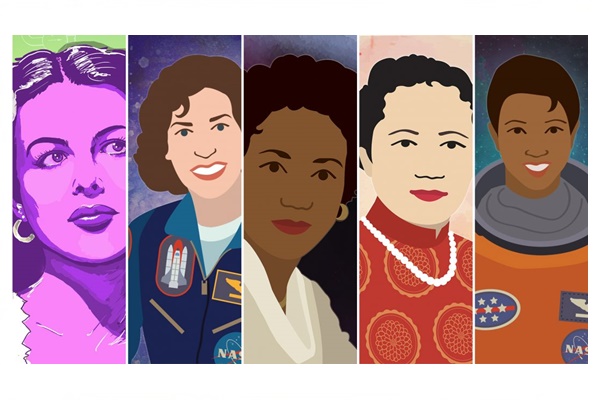 Hedy Lamarr (1914–2000) was one of the most popular actresses of the 1940s, but also an inventor. During World War II, she helped develop a way for radio signals to jump frequencies so enemies couldn’t jam the signals. The system was never used then, but the concept forms the basis of how today’s mobile phones work. The online search giant Google honored Lamarr with a “Google Doodle” animation on what would have been her 101st birthday. It shows her double life as a famous actress and inventor.

Ellen Ochoa became the first Hispanic woman to go to space when she boosted to orbit with the space shuttle Discovery in 1993. She is a co-inventor on three patents for optical systems and is currently the director of the Johnson Space Center in Houston. Ochoa applied to be an astronaut three times before NASA accepted her in 1990. In between applications, she got her pilot’s license and continued her research in optics.

Annie Easley (1933–2011) was a computer scientist, mathematician and rocket scientist. At NASA, she worked on a high-energy rocket technology that uses liquid hydrogen and liquid oxygen to boost rockets into space. Before the civil rights laws of the 1960s, Easley helped train African Americans to take the voting test in her home state of Alabama.

Chien-Shiung Wu (1912–1997) was an experimental physicist who earned many nicknames for her expertise, including the “Queen of Nuclear Research” and the “First Lady of Physics.” She helped two colleagues win the Nobel Prize in Physics in 1957, based on the “Wu experiment.” Before that experiment, there wasn’t a clear way to describe left and right without basically pointing at some defined object and saying “that’s the left side, that’s the right side.” Her work showed that a hypothetical physics law at the time was wrong.

Mae Jemison is afraid of heights, but that didn’t stop her from going into space. She went into orbit aboard the Space Shuttle Endeavour in 1992 and became the first African-American woman in space. She is also a trained medical doctor. Star Trek fans may know her as Lieutenant Palmer, the character she portrayed in 1993 in Star Trek: The Next Generation. She frequently speaks to students and encourages women and minorities to enter math and science.